On Sept. 25th, 2013 in Regina, Saskatchewan, Kelly Goforth's body was found in a red garbage bin wrapped in a hockey back in an industrial area of town. Goforth's killer, a white male, is known to have killed Richele Bear, another indigenous woman, and the family suspects he may have killed others. Goforth's death is not an isolated incident in Saskatchewan, one of many areas in Canada struggling with a shameful history of abuse, neglect and indifference towards its First Nations women and people. Human rights groups estimate that at least 4000 indigenous women have been murdered or gone missing across Canada. Though Justin Trudeau promised a national inquiry into the issue that was meant to begin in May 2017, it has been met with delays, disappointment, and controversy.

I returned home after 15 years and spent the month of April traveling across Saskatchewan meeting with Indigenous women. Attempting to cut through the numbers and the desensitized nature in which families of missing and murdered indigenous women (MMIW) are portrayed, the incredible resilience and strong tradition among communities was revealed. This was the story I saw.

Through authentic and natural portraiture and evidential landscapes, my aim is to bring the stories of these women to viewers in a humane and intimate way. Exploring the emotional space between loss and healing, women were photographed in locations where they felt closest to their loved ones, hoping to give them a sense of agency. 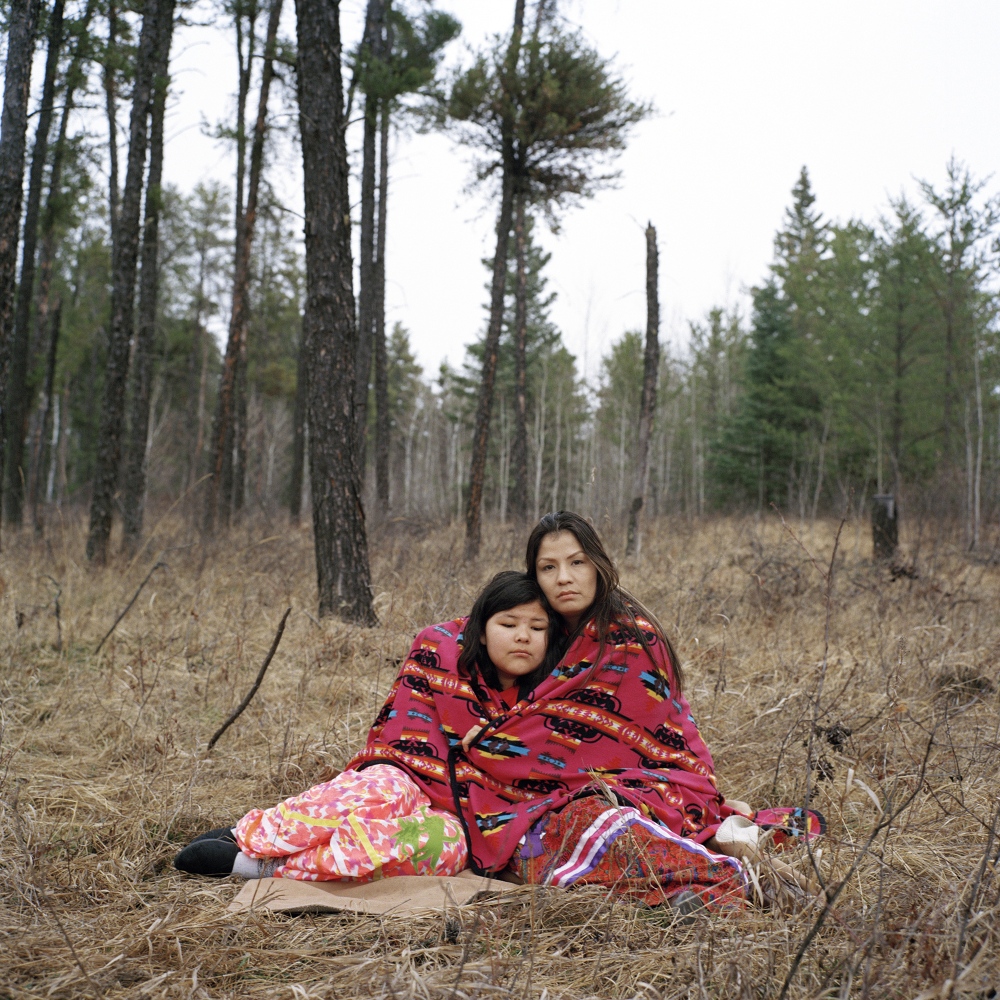 Dannataya, 10 at the time, and her aunt Michelle Burns, 30 at the time, find peace among the trees in Prince Albert, Saskatchewan. Monica Lee Burns, Dannataya’s mother and Michelle’s twin sister, was murdered by a stranger, 38-year-old white male Todd Daniel McKeaveney, and found dead in a desolate area outside Prince Albert in January 2015. McKeaveney received 13 years in prison. “I feel lonesome a lot. My Elder tells me to pray to the Creator and to go near a tree,” Michelle said. “When you think about all the missing and murdered indigenous women, they don’t have a voice, so their family members are the ones trying to have a voice. I have to remember that [Dannataya] is watching me. When I walk, I try to walk with good intentions so that when she’s older she won’t end up lost. Her mom would want good things for her.” 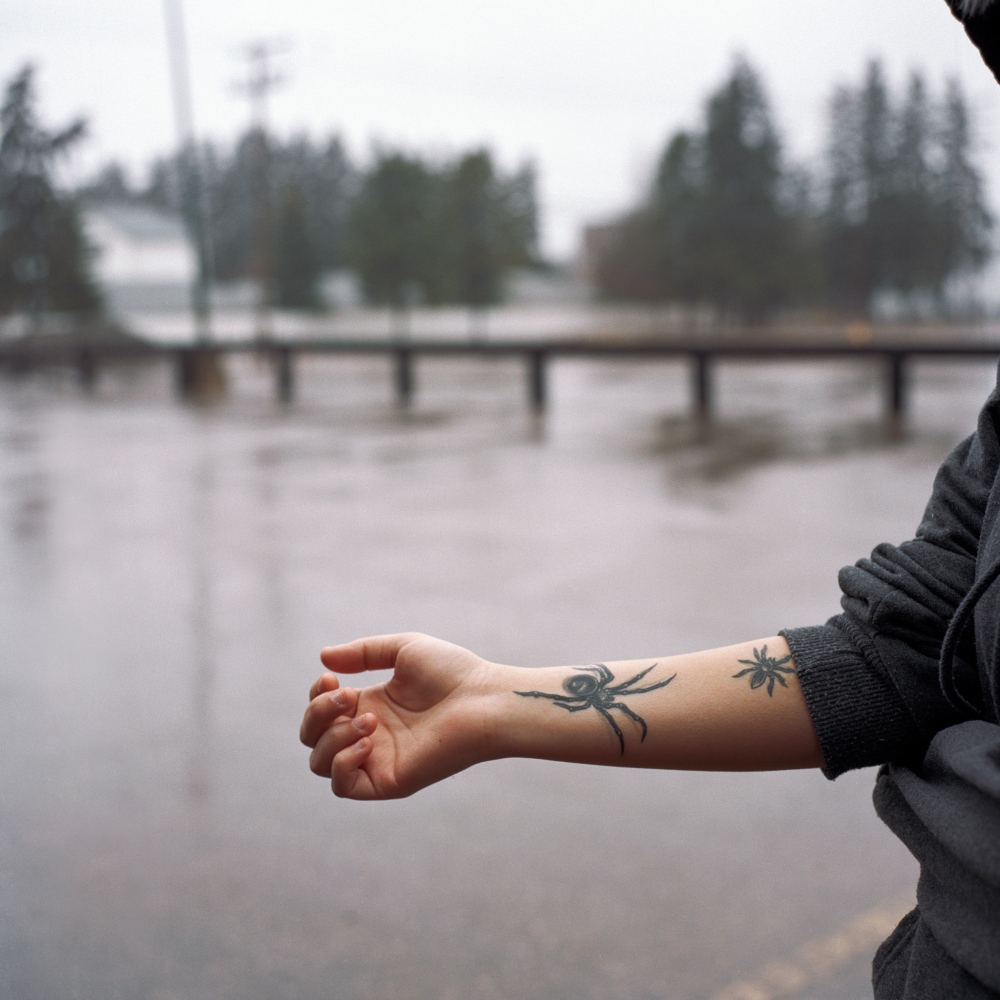 Aleisha Charles, 21 at the time, shows a tattoo dedicated to her mother, Happy Charles, whose name in cree “Kokuminahkisis” means black widow. Aleisha and her three other sisters traveled to Prince Albert from La Ronge to search for their mother who went missing at the beginning of April 2017. Though their mother is addicted to intravenous drugs and has been in and out of rehab since she was a teenager, she has never been missing for this long, according to Regina Poitras, Happy’s mother. Aleisha’s mother remains missing today. 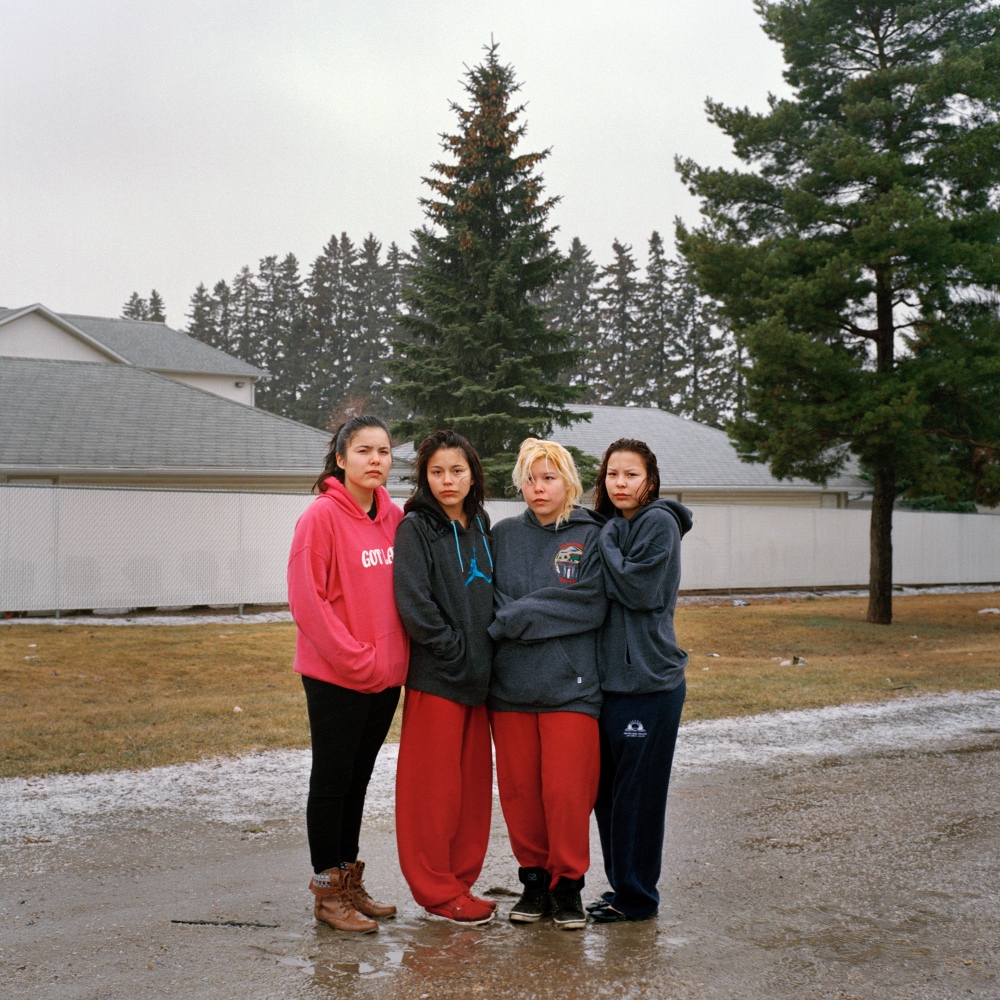 Sisters Marcia Bird, Margaret Bird, Aleisha Charles, and Ariel Charles of La Ronge, are pictured in Prince Albert during a search for their mother, Happy Charles, who went missing at the beginning of April 2017. Some of the daughters had vivid dreams about where their mother might be, and with little police support, instigated a search on their own. Happy, who has been addicted to intravenous drugs since she was a teenager, has had spurts of disappearing, but never for this length of time according to her mother, Regina Poitras. The Federation of Sovereign Nations estimates that 60 percent of missing women in Saskatchewan are indigenous, though they make up only 6 percent of the population. Happy remains missing today. 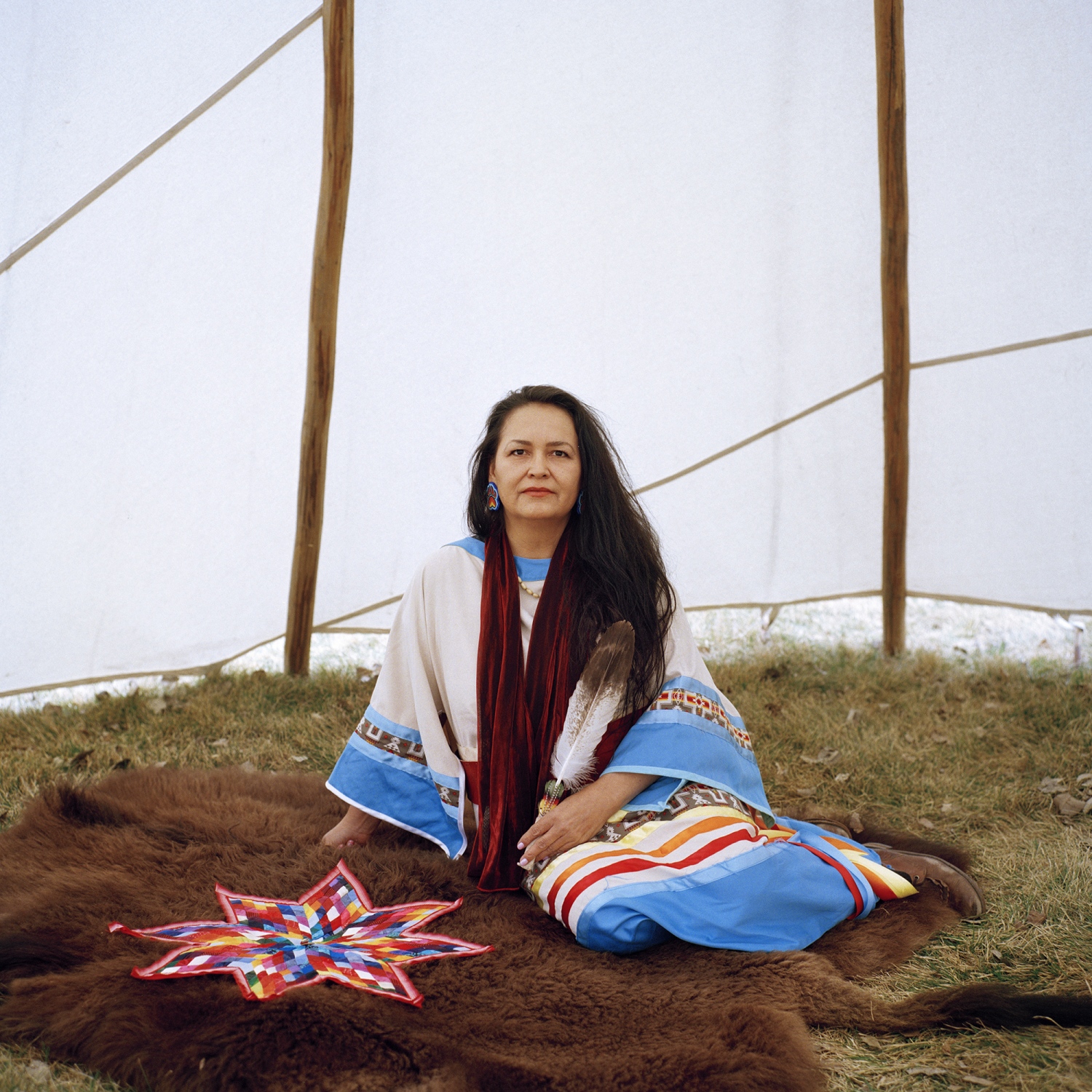 Tracey George Heese, 42 at the time, sits in a tepee on buffalo skin, a symbol that reminds her of her late mother, Winnifred George. Winnifred was murdered and discovered next to a park bench in Edmonton, Alberta, more than 20 years ago. Tracey still has no answers. “This buffalo skin represents Canada, this North America. This was [our ancestor’s] land. I think of all the buffalo
that were slaughtered [here]… Are aboriginal women to be sacrificed as the buffalo have?” said Tracey. “Not enough is being done. The Canadian system is derailing us… growing up and
hearing of these deaths of our aboriginal women, it doesn’t matter if we’re educated. All you have to say is she’s aboriginal, and people have that stereotype.” 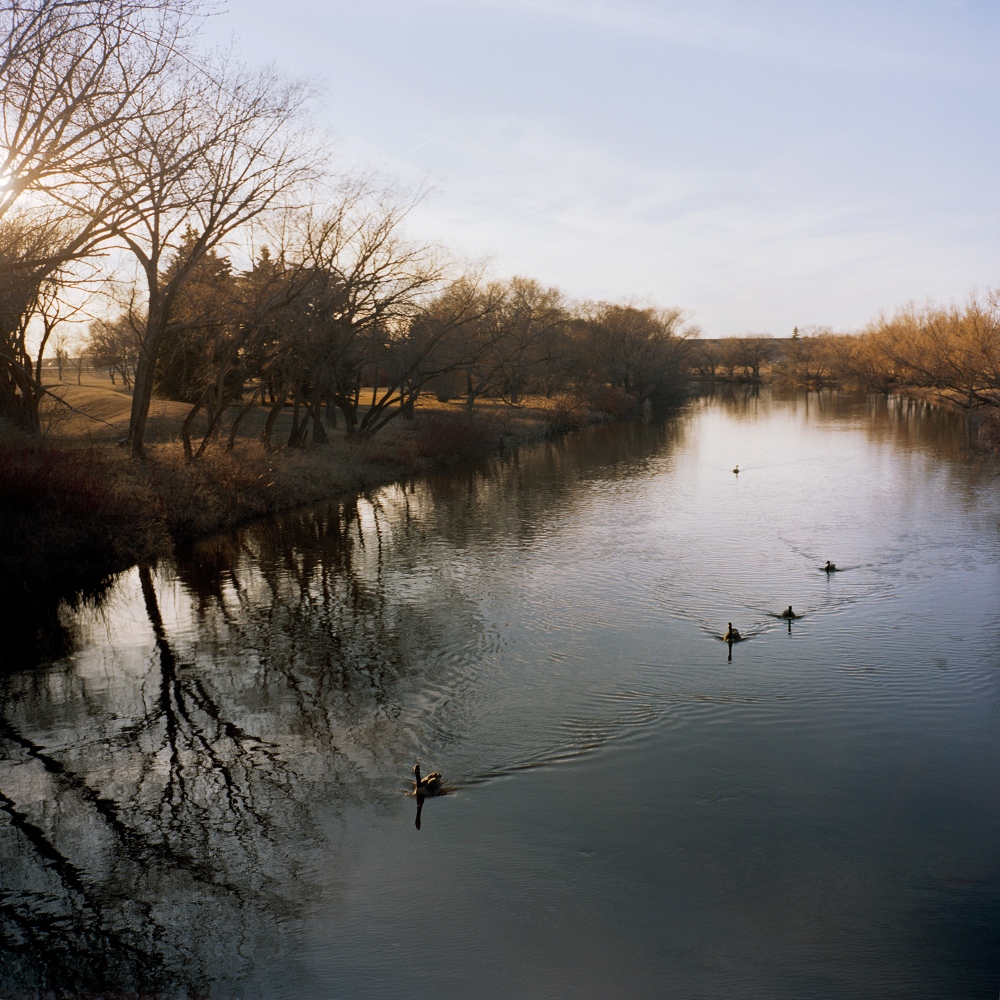 A view of Wascana Creek in Regina, Saskatchewan, where 18-year-old Sharon Frances Merasty was found dead by snowmobilers in 1993. Her death remains unresolved. 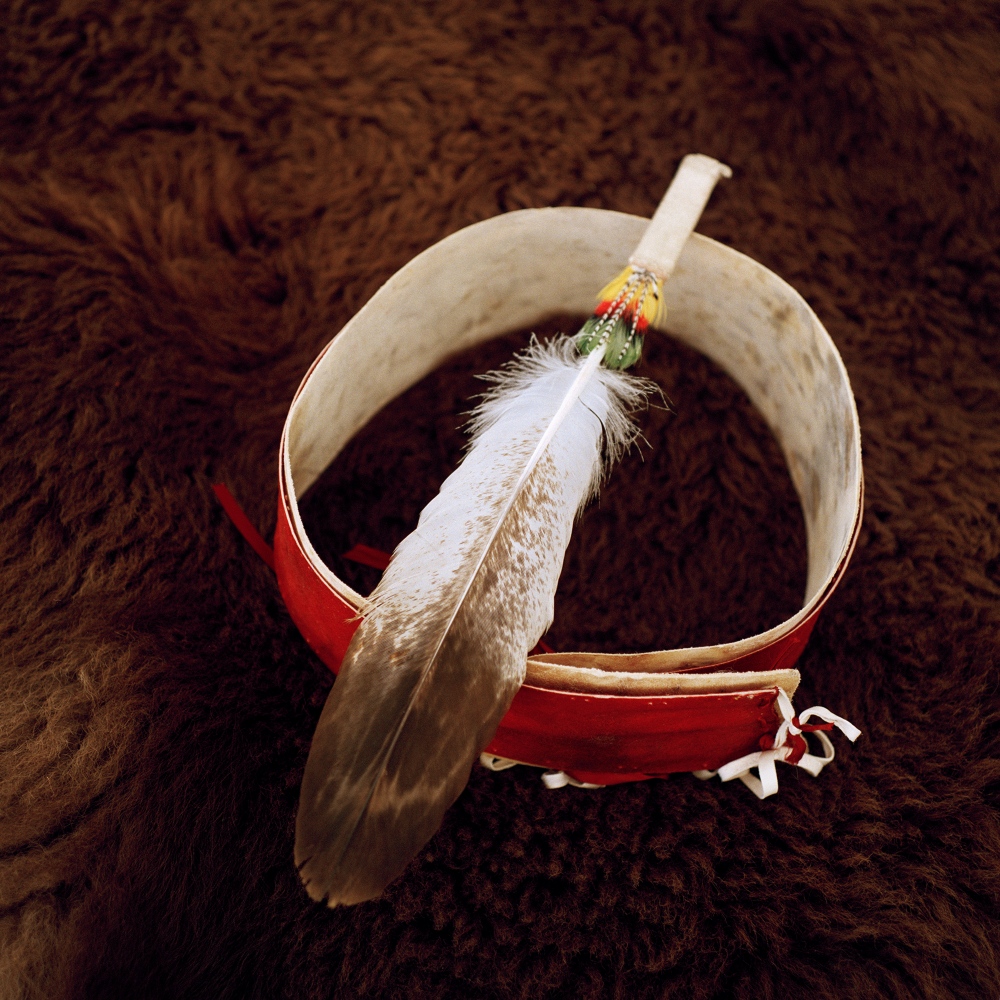 Tracey George Heese’s eagle feather and buffalo rawhide belt, symbolic items she uses in ceremony and traditional dance, sit atop buffalo skin. “Being initiated into the powwow circles has helped me dance forward in life, to claim back my identity…to dance for those who cannot dance” said Tracey. Her mother, Winnifred George, was murdered and discovered next to a park bench in Edmonton, Alberta over 20 years ago. Tracey has since become active in speaking out on the issue of missing and murdered indigenous women. “It is known when holding eagle feathers to speak only the Truth…for me the MMIW [movement] is to bring awareness for those that can no longer speak.” 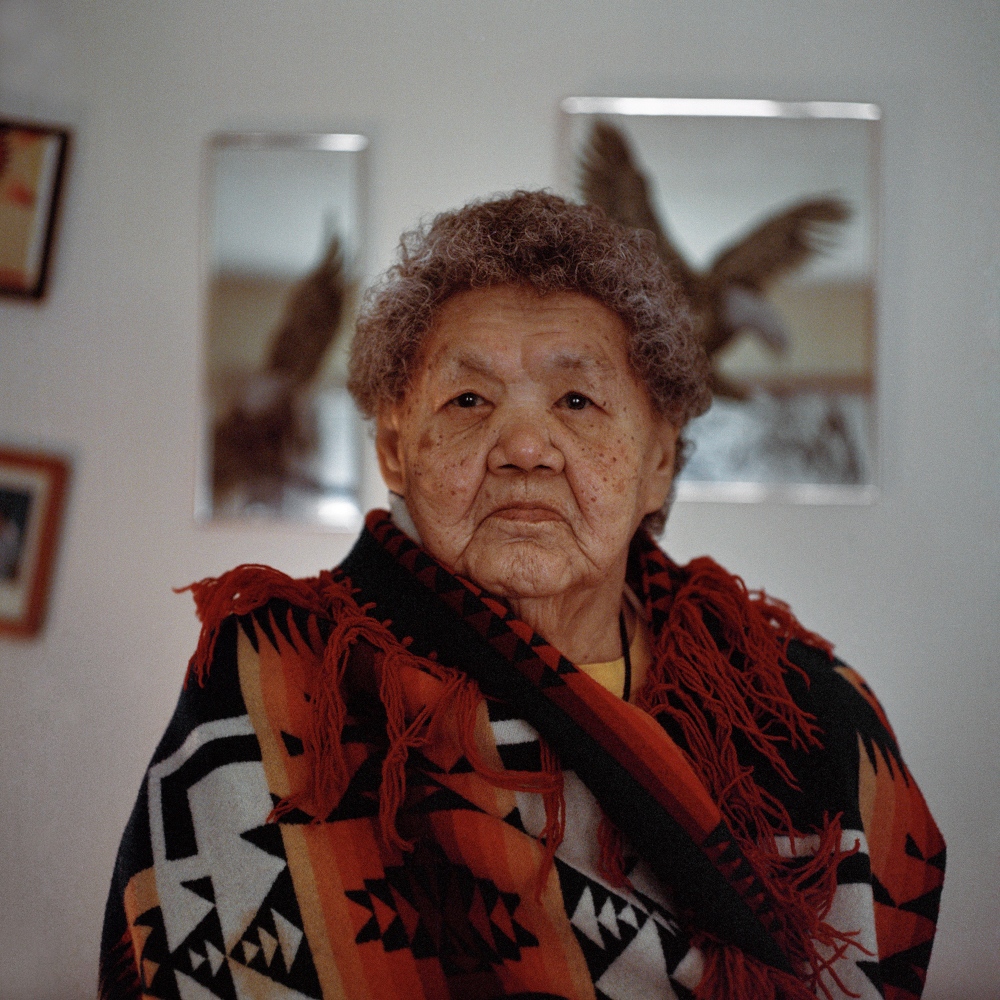 Elder Florence Isaac, 84, in her home in Regina, Saskatchewan. As a residential school survivor, Florence is no stranger to shame and trauma as a result of violence and abuse: “we’ve kept the hurt inside, we’ve packed it, we’ve packed it, we’ve packed it, now that it’s time to bring it up, it’s shameful” she said. “I feel sorrow. Justice is not really being served to these women…especially when it’s an Indian….if this was a white, it would be a different story. It’s discrimination. This issue [of missing and murdered women] has been going on for a long time, but as I said, nobody listened.” 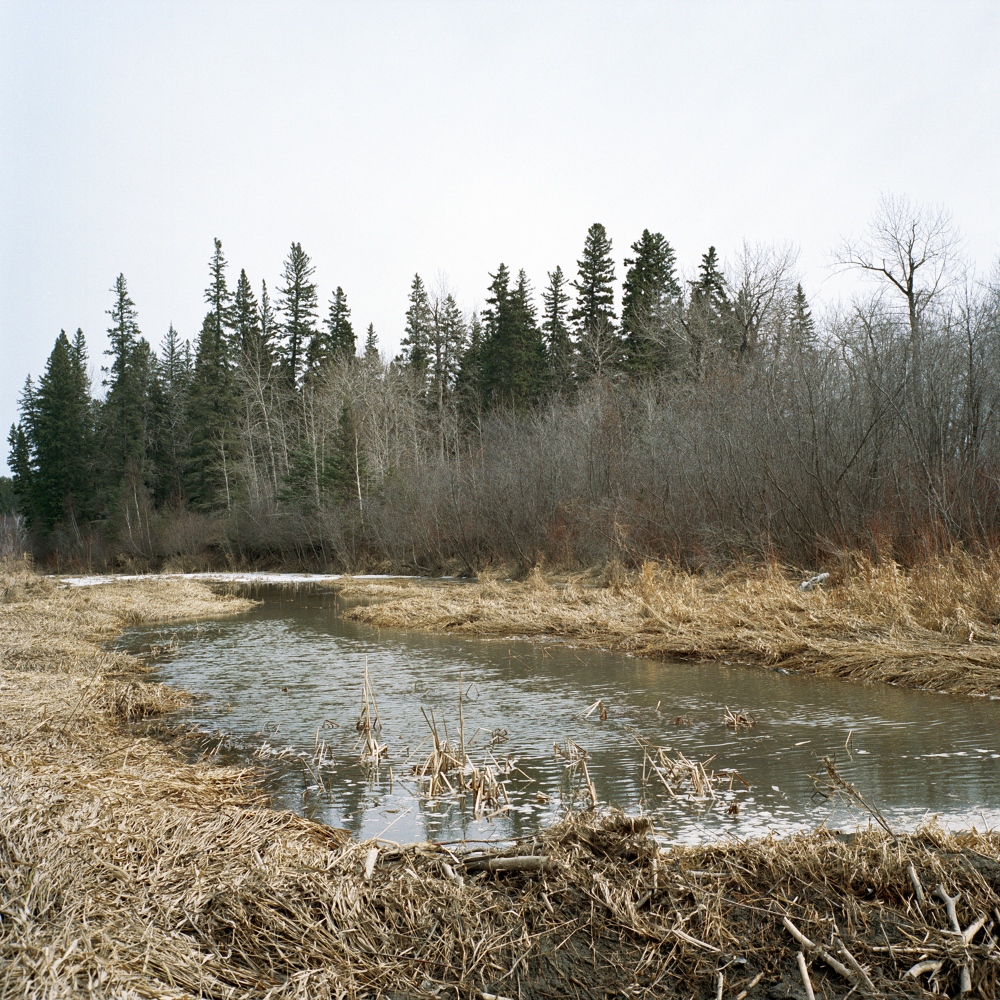 The North Saskatchewan River located just outside of Prince Albert where Beatrice Adam’s body was found on October 12th, 2014. Her death remains unresolved and her family is left without answers. Beatrice disappeared along with her boyfriend, whose body has yet to be located. “She’s gone now, we just want to know how she died” said Beatrice's father, Alan Adam. 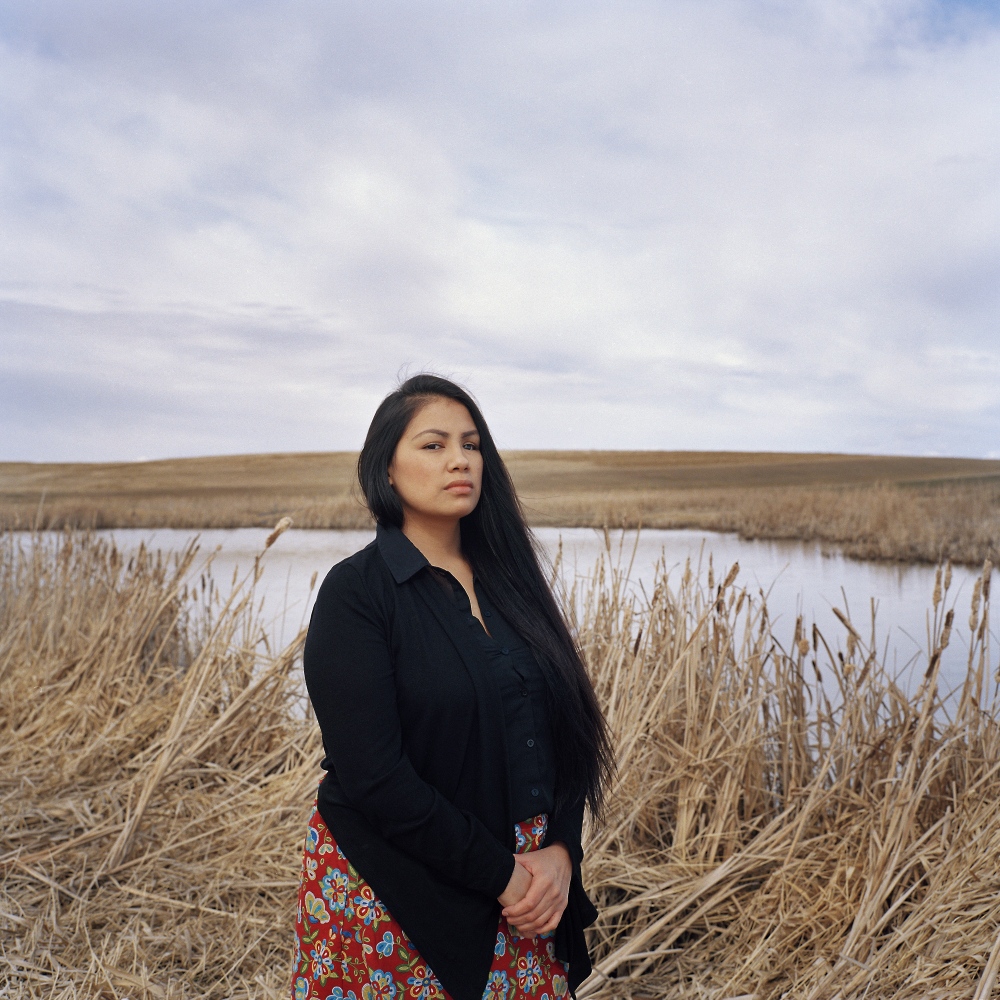 Jessica LaPlante, 31 stands on the Prairies north of Regina, Saskatchewan. “Growing up as an indigenous girl on the Prairies, you know you’re not safe. As a teenager being followed, having white men approach you, there’s that fear. You know how you’re valued in society” Jessica said. She has become an advocate on the issue of missing and murdered indigenous women since she has had two family members disappear. “The idea that indigenous women are less valued than other women is so deep rooted…our people are so devalued and dehumanized, until we look at all the factors we can’t do our missing justice.” 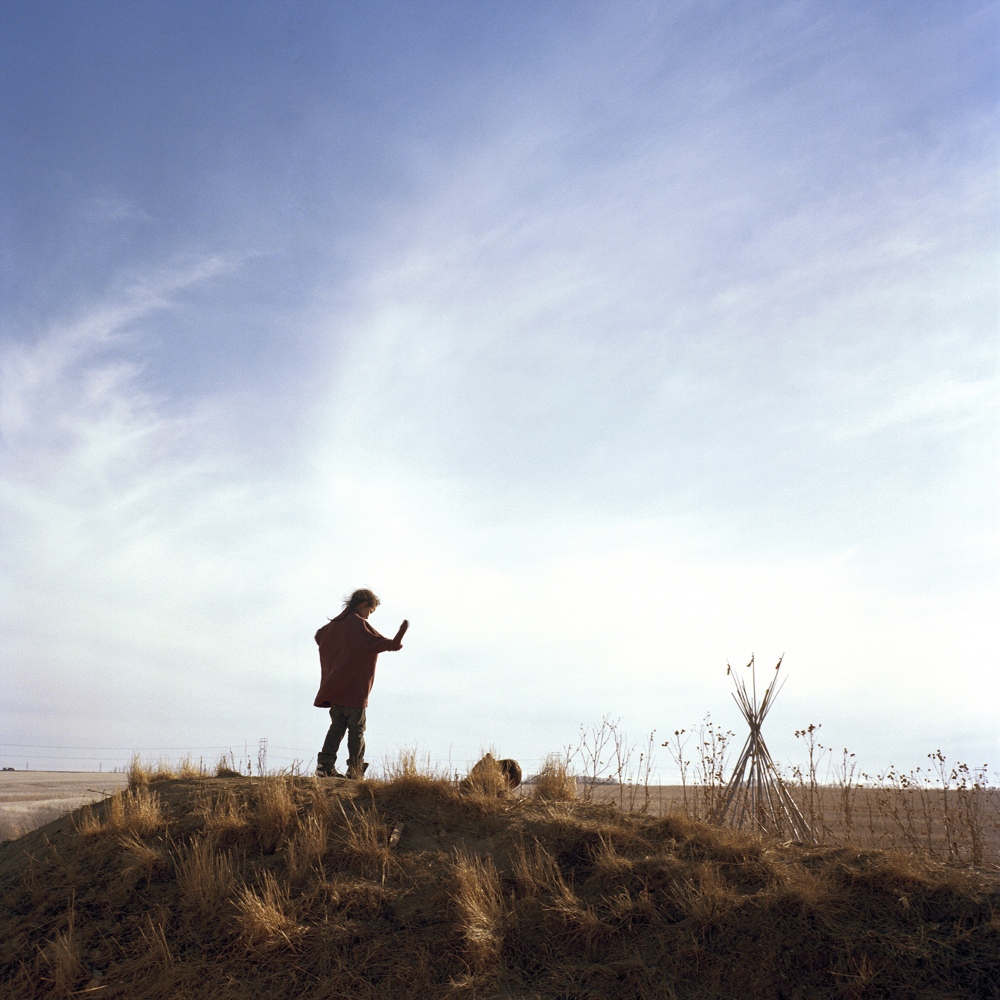 A little girl plays on the outskirts of Regina, Saskatchewan at Elder Archie Weenie’s healing center as her mother participates in a sweat lodge. Elder Weenie holds sweat lodges and pipe ceremonies, and offers traditional teachings as a path to healing. Many people who participate, including adults and children, have been lost in trauma and grief. 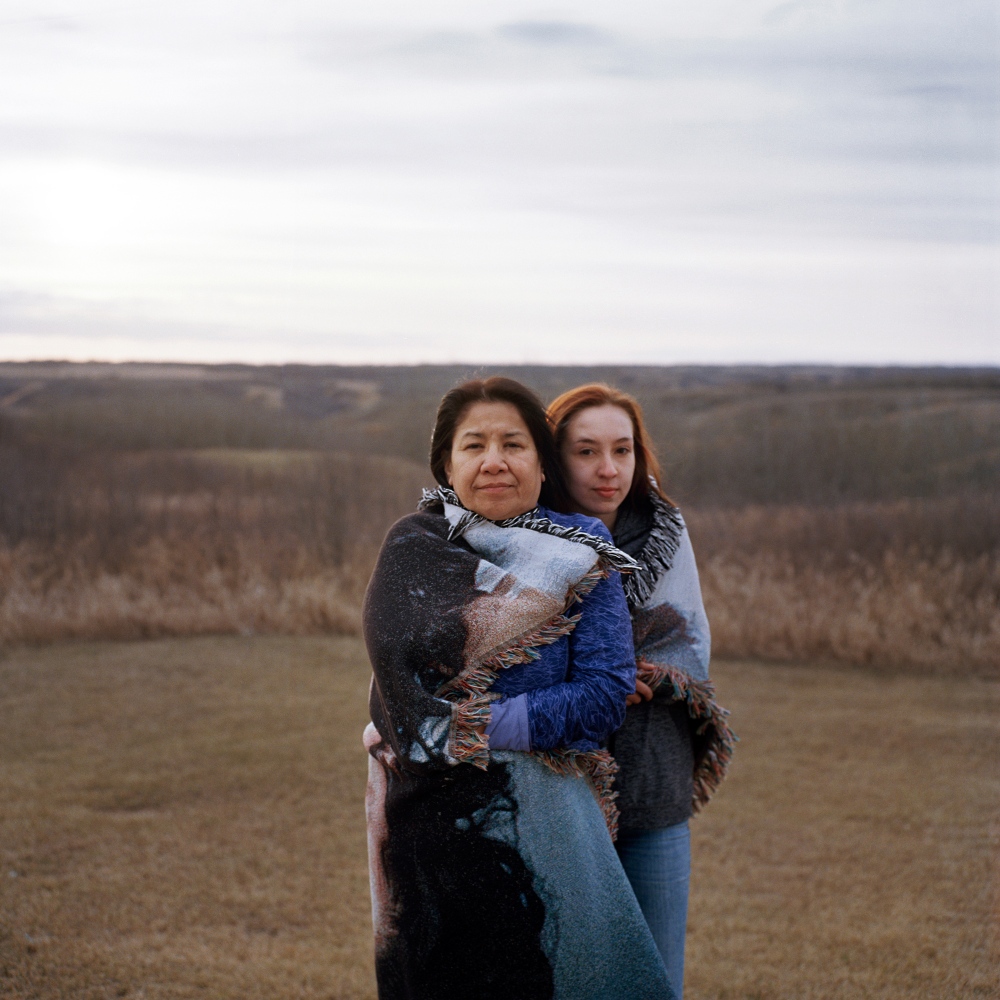 Gwenda Yuzicappi, 51 and her adopted granddaughter, Leslie Maple, 16 are pictured outside of their home on Standing Buffalo First Nation northeast of Regina, Saskatchewan. Gwenda's daughter and Leslie’s caregiver, Amber Redman, went missing in 2005 until her remains were located in Little Black Bear First Nation almost three years later. Amber was beaten to death by two men after she was convinced to go to their house during a late night out. Leslie was only 5 years old at the time. “[Leslie] was Amber’s way of seeing what was going to happen to her. Leslie was my strength [when Amber went missing], she would soothe me and pet my hair. If it wasn’t for Leslie…I don’t know where I’d be.” This was Leslie’s first time discussing the murder of Amber, she faces daily reminders while going to school with the daughter of one of Amber’s killer’s. 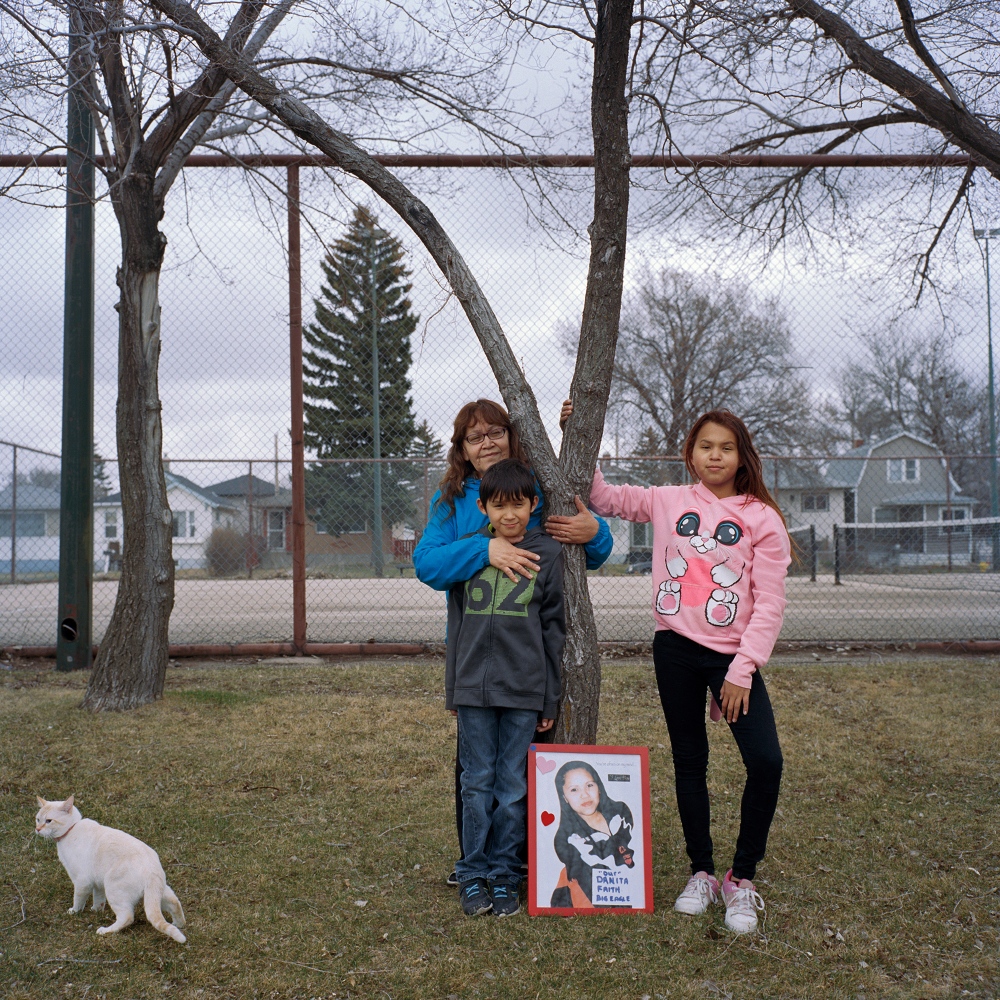 Diane Big Eagle is pictured with her grandchildren Cassidy, 14 and Talon, 10 and their cat Waffles in their favorite park in Regina, Saskatchewan. Diane’s daughter, Danita Big Eagle, disappeared over ten years ago and her case remains unresolved. Diane has been caring for her grandchildren since: “I want them to be happy,” she said. “When I’m sad, they’re sad, when I get depressed, they get depressed. If I can manage to cope, so will they. I have to make them think she’s somewhere out there…that she’s coming back.” 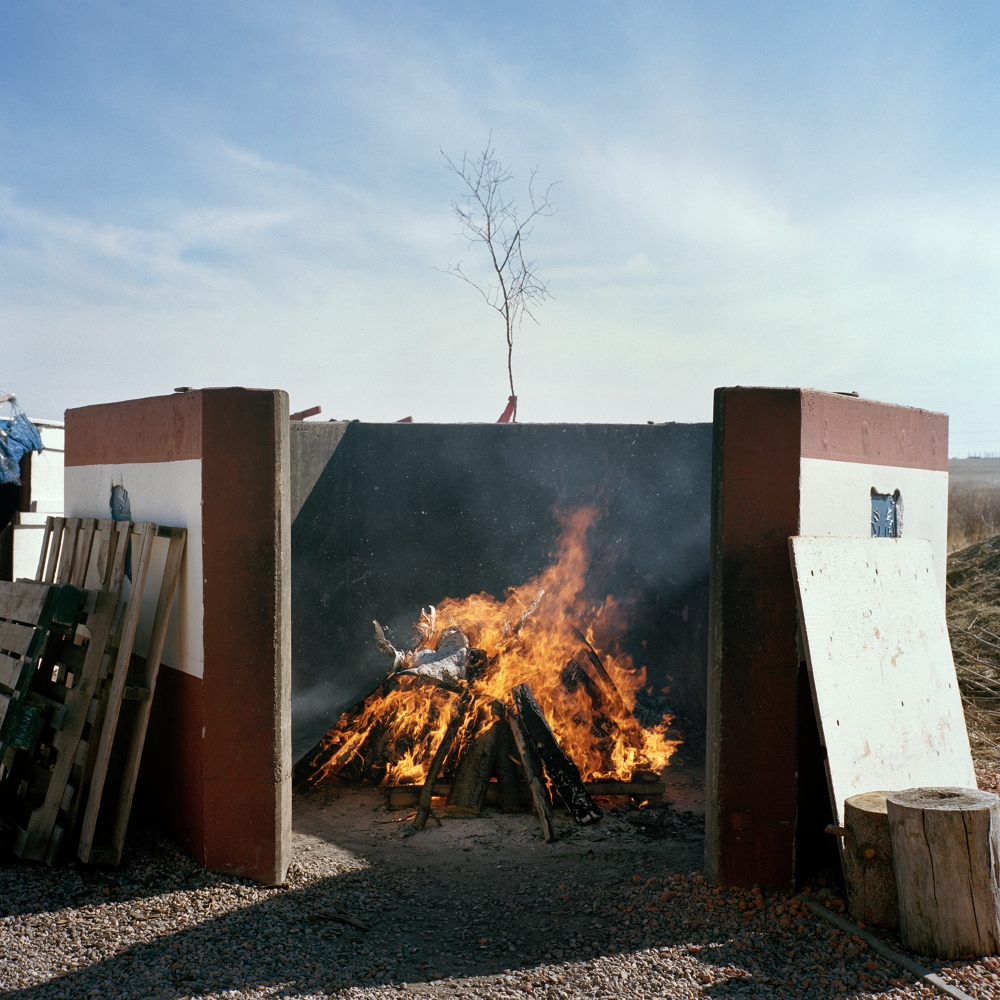 Wood burns in preparation for a sweat lodge on the outskirts of Regina, Saskatchewan. Many women facing the loss of a loved one have turned to sweat, ceremony and traditional teachings. “The healing started from that first sweat. I sweat for four days,” said Gwenda Yuzicappi, whose daughter was found dead on Little Black Bear First Nation on May 7th, 2008. “I still need all those ceremonies” said Ms. Yuzicappi. 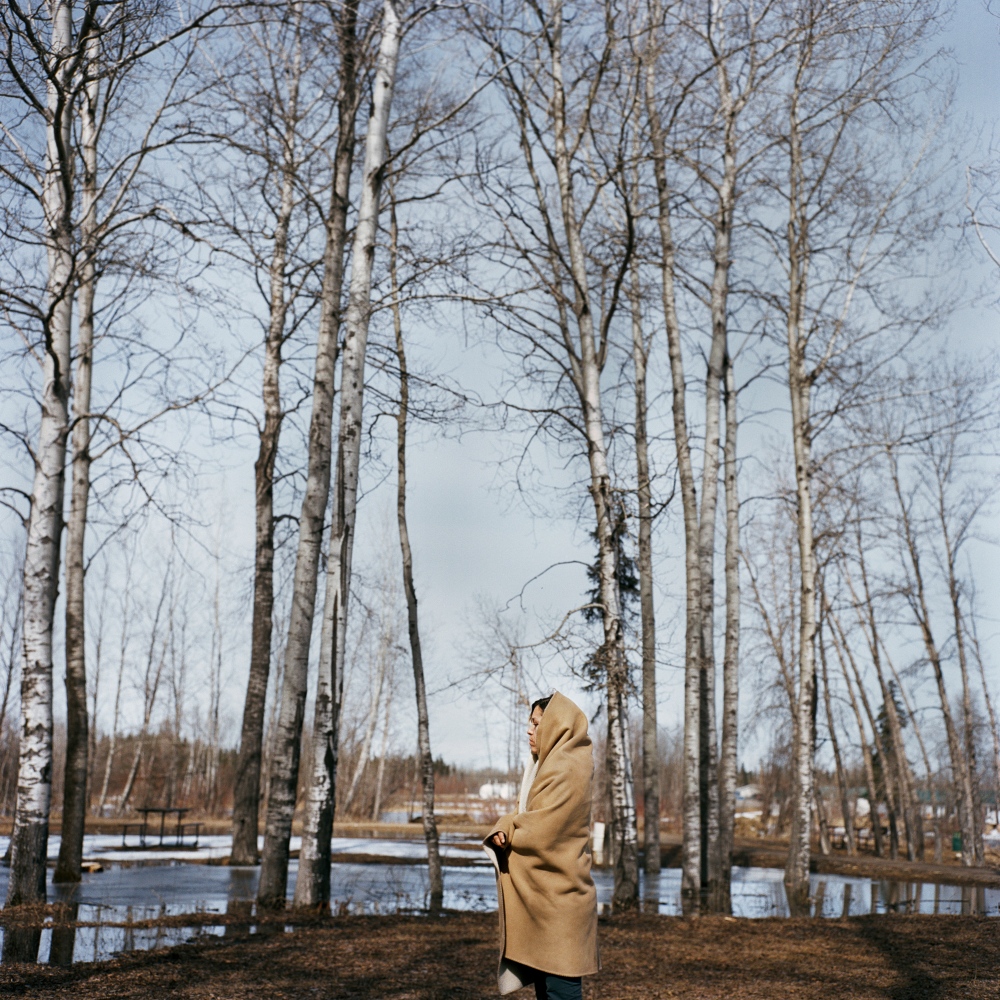 Mary Tremblay, 33 at the time, finds solitude in nature in Saskatchewan’s northern town of La Ronge. Mary’s sister, Julie Houghton, was found dead in a ditch along the highway between Quinton and Raymore back in 2005. Her death remains unsolved. "I would like to find the man who killed my sister” said Mary. 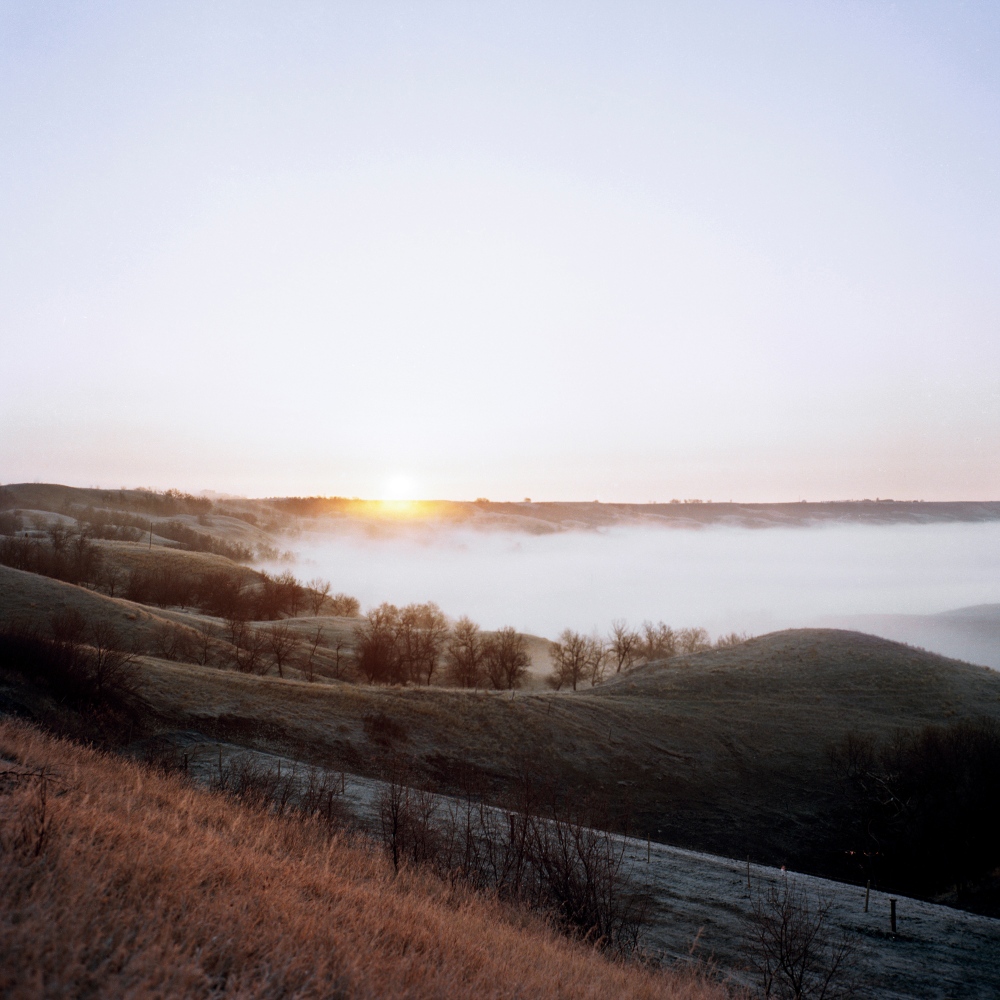 The sun rises over the Valley of Fort Qu’Appelle. The Cree and the Saulteaux First Nations were once nomadic in these lands in search of buffalo. It was here, in 1874, where their rights and privileges to 75,000 square miles of land would be signed over to the Queen under Treaty 4. 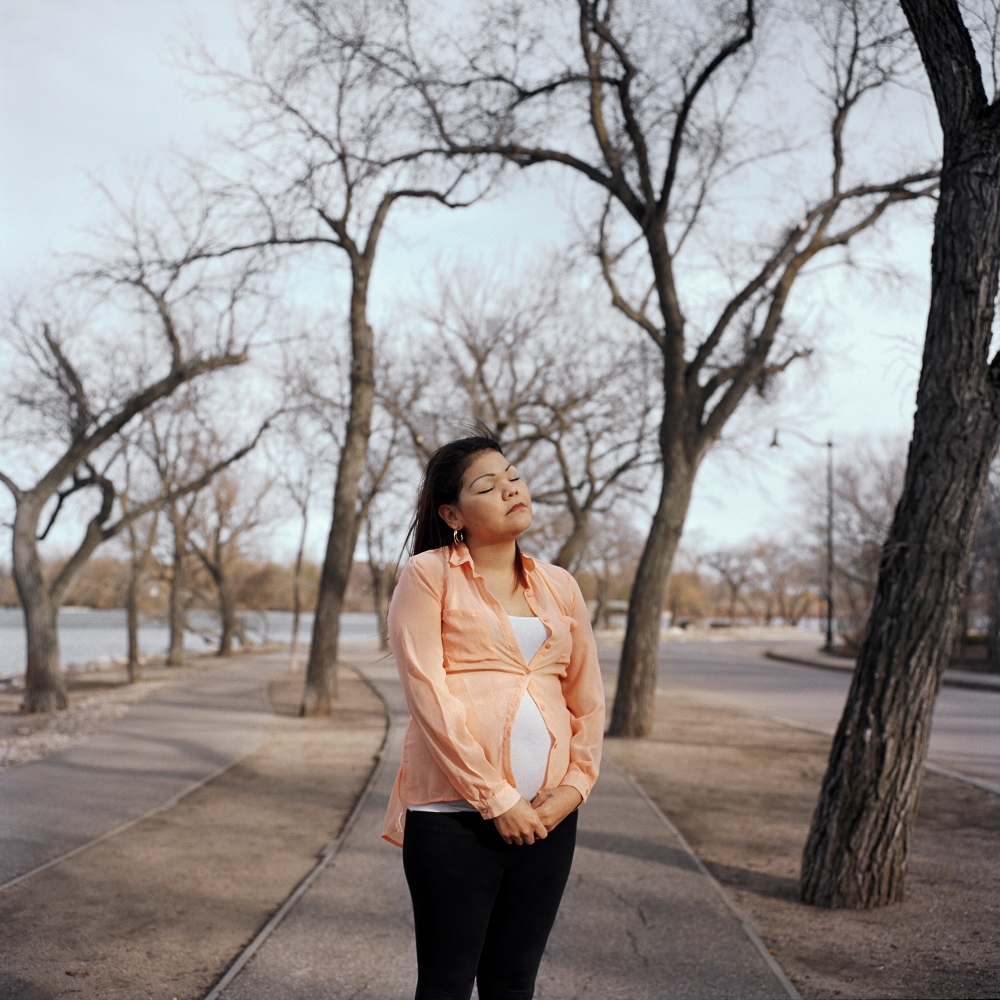 Shayleen Goforth, 28 stands for a portrait at Wascana Lake in Regina, Saskatchewan where she remembers happier days with her sister, Kelly Goforth, who was found murdered on September 25th, 2013. Kelly’s body was wrapped in a hockey bag and found in a red Loraas garbage bin by waste pickers in an industrial area of Regina. Kelly’s killer, Clayton Bo, is a white male known to have killed Richele Bear, another indigenous woman, and the family suspects he may have killed others. “I had to forgive him to feel peace within myself…I was so sick. I went to my Elder and I had a good sweat and a smudge and I told God I forgive the man who killed my sister…I believe God changes people, so I really hope he changes Clayton…Kelly was the foundation of our family.”